About Us > Why ICC Kyoto > 50 Years of Experience ＆ Results

Introducing our story and track record in the 50 years since our establishment.

November 8th, 1957
Construction of Japan’s first international conference center was approved by the Cabinet, and the resolution included the following requirements.

September 15th, 1959
The Cabinet decided to build the international conference center at Lake Takaragaike, Kyoto, for the following reasons.

1. Kyoto is the capital of Japan’s proud history and culture.
2. The city has an abundance of tourist resources, including famous temples and shrines, as well as traditional arts and crafts.
3. The Lake Takaragaike building candidate site has the classic beauty of a Japanese garden. 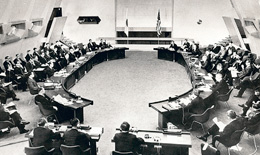