About Us > The Architecture > Anecdotes > Encounter Authentic Japanese Culture 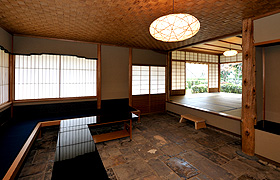 Gaze at Lake Takaragaike from the Japanese garden, pass through the pine grove, and step onto the footpath. A Sukiya-zukuri building with a cypress-bark thatched roof appears before you. The hipped roof features purposefully differing inclines that create a unique ridged shape, leading visitors into a time gone by.

Tea Ceremony House Hoshoan was completed in 1967, one year after the conference center opened. It was named for the “Takara” or “Ho” (treasure) character in Takaragaike, and the “Matsu” or “Sho” (pine tree) character from the name of its donor, Mr. Konosuke Matsushita, the first chairman of the Kyoto International Conference Center. (Implements were also donated by the Urasenke, Omotesenke, and other tea ceremony schools.)

The Sen Art Studio created the architectural design, and Sotoji Nakamura constructed the building. Kojiro Kawasaki was the garden designer, and Shusai Iwaki was responsible for sashimono (wood joinery techniques). Mr. Nakamura and Mr. Kawasaki worked on Tea Ceremony House Hoshoan at Osaka Castle and the Koshoan Teahouse at Wakayama Castle, as well as many others, and have established a unique style.

Hoshoan was designed with the awareness that it would receive many international visitors, being attached to an international conference center. It has complete heating and air conditioning facilities, and the main room may be viewed from outside in an open design. This ten-mat room has the toko-no-ma alcove next to the guests and the hearth in the central mat of a 4.5 mat arrangement. Small Kitayama cedar logs are used in the ceiling. 13 guests may sit on tatami mats in the main room, which may be used in conjunction with the adjoining Ryurei-style room, in which about 12 guests may leave their shoes on and sit in chairs. This style is referred to as “Yushin” seating. The Ryurei-style room has a woven ceiling of grained red cedar, the pillars are Kitayama logs, and the seating uses thick, strong Atesabi logs. The floor uses Shigaraki ceramic tiles, in contrast to the traditional stone tiles. This is believed to be the first use of this style.

The teahouse is surrounded by mixed hedges of oak, Japanese andromeda, and white ekianthus to limit views from outside, and has a lawn garden for outdoor tea ceremonies. The interior garden has a stone basin and stone lantern, and moss-covered stepping stones are placed on the ground. The garden inspires us to keenly feel the changes of the Japanese seasons, with cherry blossoms in spring, new greenery in summer, bush clover and maple leaves in autumn, and a coating of snow in winter.

The significance of holding an international conference in Kyoto is inviting participants to encounter the essence of Japanese culture. Hoshoan may be used in many ways: authentic tea ceremonies, welcoming special guests, or presenting Japanese traditional culture at a spouses’ program. It also offers moments of tranquility between meetings. Encounters with true Japanese culture at Hoshokan will remain fond memories of Japan for every ICC Kyoto visitor.