Untold story of the birth of the ICC Kyoto building

ICC Kyoto is shaped as a combination of upright and inverted trapezoids, and its traditional Japanese patterns, reminiscent of a Shinto shrine or gassho-zukuri steep-roofed hut, make a strong impact on visitors.

The building is both innovative and stately compared to other conference centers in Japan or even around the world. It is a proud example of the 1960s modern architectural aesthetic, while also being a cultural legacy in harmony with the ancient capital of Kyoto and the surrounding natural environment. It was selected as one of the 20 best modern architecture examples in the Kansai region by DOCOMOMO Japan, and one of the 100 best public architecture examples by the Ministry of Construction (present-day Ministry of Land, Infrastructure and Transport). It also received the Construction Business Association Award.

The architect Sachio Otani was born in Tokyo and studied architecture at the University of Tokyo and its graduate school before apprenticing himself to Kenzo Tange. The first public design competition in Japan was held in 1963 to create the Kyoto International Conference Center.

The competition guidelines included this comment from the Minister of Construction: “Many international conferences have been held in Japan recently, but we have practically no suitable facilities. Japan must actively attract conferences to achieve breakthroughs in political, economic, and academic fields, and contribute to international cultural exchange. This conference center must become a new symbol of Kyoto as an international cultural tourism destination, as well as a superb work of art worthy of our pride to the world.”

The Japanese government held a public competition in 1963 with the concept of “building a structure for international meetings in Japan comparable to the United Nations Headquarters”. 195 entries were submitted, and Sachio Otani’s proposal was selected.

Otani mentions in his notes that, “I felt the atmosphere of the ancient capital of Kyoto in the tranquil scenery of Lake Takaragaike nestled between the mountains with Mt. Hiei in the background. I allowed the forms of nature to frame my design to avoid disturbing this atmosphere.” His dialogue with nature, which he described as “investigating the proper role of architecture within natural systems”, may be considered a traditional approach to nature in Japanese architecture.

His dialogue with nature must have guided him to the conference center’s unique architectural character, created through a combination of upright and inverted trapezoids. The conference center’s scale is large compared to the gentle curves of the surrounding mountains, and a square design made it seem as if something alien had suddenly been placed there. He decided to give the hall’s walls, which had seemed to protrude out against the mountains, an inward incline to form a trapezoid shape, ensuring the required floor area while reducing the volume of the building and easing the perceived pressure against the surrounding mountains.

On the other hand, the hall’s supporting spaces, such as the office and ante-rooms, are covered by deep eaves, following in the footsteps of ancient Japanese architectural methods that produce comfortable living spaces, and its outside edges form an inverted trapezoid.

Otani also spoke about the identity required in an international conference center: “An international conference center is an important space that welcomes guests of differing cultures from diverse nations and regions, and it requires internationalism and commonality as a work of modern architecture, while being based in Japanese traditional cultural elements.” This building has a distinctive exterior and highly functional interior, and its level of completion is highly regarded.

Design of the Main Hall

ICC Kyoto’s Main Hall features a symmetrical design, with a high ceiling open to the fourth story and an expansive trapezoidal shape. Step inside to experience a pleasant sense of excitement that will remind you to stand up straighter in this highly formal atmosphere.

The ceiling is decorated with a disc which symbolizes the earth floating in space, which is actually a reflective plate for lighting. This disc also hides the central portion of the exposed ceiling beams, giving a sense of dynamical stability to the space. The aluminum objects to either side of the stage wall are flagpoles for displaying national flags. Using the flagpoles directly in the design reduces the impact of the oversized chairman’s podium area for a sense of stability. The center of the stage wall is designed as a V, and aluminum casting pieces of various shapes are embedded in it. This symbolizes that an international conference is composed of a gathering of people from different countries and regions with unique cultures and beliefs.

This is based on the architect Sachio Otani’s idea that “because the conference hall is composed of three spaces, for national delegations, a chair, and an audience, it should have the character of a city square.” The conference hall is composed of multiple spaces for the chair, delegates, audience, press, and organizers to gather, just like a city square is surrounded by a variety of buildings. 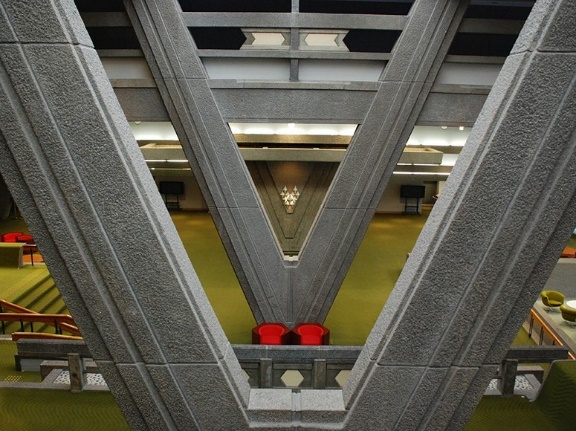 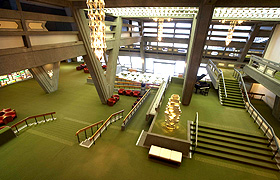 In December 1997, the Third Conference of the Parties to the U.N. Framework Convention on Climate Change (COP3) was held at ICC Kyoto. The Committee of the Whole was being held intermittently and then suspended, and no end was in sight. The conference was supposed to be adjourned soon, and an atmosphere of nervousness pervaded. Behind-the-scenes negotiations were being held throughout the ICC Kyoto lobby and lounge. The Chair, Mr. Raul Estrada-Oyuela, could be seen approaching the delegations of countries opposed to consensus and inviting them to the lounge sofas several times.

The lounges on each floor, with their slightly differing levels, offered views of the movements of delegates in the Main Hall and smaller conference rooms, as well as the operations staff and press in the third-floor corridor. Individuals could observe each other’s movements to gain a sense of the progress of the meeting overall.

The ample lobby, lounges, and other public spaces compose approximately 70% of the building. Looking from the first floor lounge at the V-shaped pillars halfway up the stairs to the second floor, a light glows from within the three powerful V-shaped pillars. This light combines perfectly with the gentle indirect lighting from the ceiling for an indescribable atmosphere throughout the lounge. Unlike the grandeur of the exterior, the interior is calm and subdued.

“Formal discussion is for the conference hall. The lounge is like a city square for informal meetings, discussions, and interaction.”

The architect Sachio Otani designed the lounge as a natural space converted into interior architecture, contrasting with the formal conference hall. This can be seen in the stone wall-like treatment and moss-colored carpet.

Informal communication is held between meetings over a cup of coffee. This is an opportunity for meaningful interaction and one of the important elements for success for any conference.